Amazing Grace: How Sweet the Sound

The author, John Newton, could not have known the impact his words would have. Newton’s own past had shaped him greatly, and his reflections on those earlier times had a profound effect on his writing. Phrases like, “I once was lost, but now am found, was blind, but now I see,” and “Thro’ many dangers, toils, and snares, I have already come,” illustrate this. He had been a slave trader, a self-professed “wretch” whose conversion to Christianity led him to a life serving as a minister in the Church of England.

The context and events of Newton’s life, explored in this exhibit, provide an understanding of the purpose behind the words of the hymn. After Newton’s death, “Amazing Grace” was refined and adjusted to fit the more nuanced context of individual communities who adopted it as their own. This exhibit traced the journey of “Amazing Grace” as the beloved song was infused with individuality. Blues, gospel, jazz, folk, and eventually rock and pop music adopted the song into their respective genres. By the 1970s, it had reached beyond church walls and religious gatherings moving to streets filled with marchers for civil rights, onto the stages of concerts pleading for peace, and into recording studios looking for something new to make a buck. And while audiences have changed considerably, “Amazing Grace” has become one of the most recognized and beloved songs in the world.

Located on Floor B1
Included with Admission 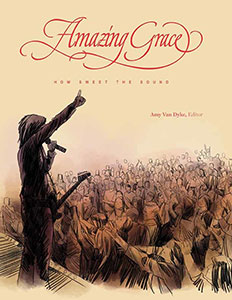 Images from the Exhibit